Let’s play a matching game to see what you know about student achievement in some of the Front Range’s largest school districts.  As we’ve shown in numerous articles and videos, demographics matter.  Last year, the article, “Stop Blaming Teachers” showed that poverty is a significant and substantial factor in student achievement in Jefferson County. The Jeffco DataView videos, “Demographics Matter“, and “Demographics Matter – the math” further illustrate that point.  In other words, standardized test scores rise as poverty rates (as measured by free and reduced lunch rates) goes down.  Conversely, the higher the poverty rate, the lower the test scores.

How do you think you did?

There’s actually a few surprises in here, so we’ll talk about these.  Did you match D with Westminster 50?  That’s correct.  Westminster 50 (also known locally as Adams 50) has an FRL rate that is mucher than surrounding districts and the state average.  Its ACT composite scores reflect that as well.

Did you match G with Douglas County?  That’s incorrect!  The correct value is H.  Despite having one of the lowest FRL rates in Colorado and the Front Range, it’s ACT scores are not corresponding to the general trend.  There are good reasons why.  Since 2009, Dougco’s board began implementing the same policies as Jeffco’s board, only with a four year head start.  The results of these policies have seriously impacted academic achievement in Dougco.  I highly recommend you take a look at the following videos from Jeffco DataView:

In fact the same inverse relationship between poverty and ACT test scores is true here as demonstrated by the following graph.  In this case, we will show the percentage of non-FRL students per district and align that with test scores to demonstrate: 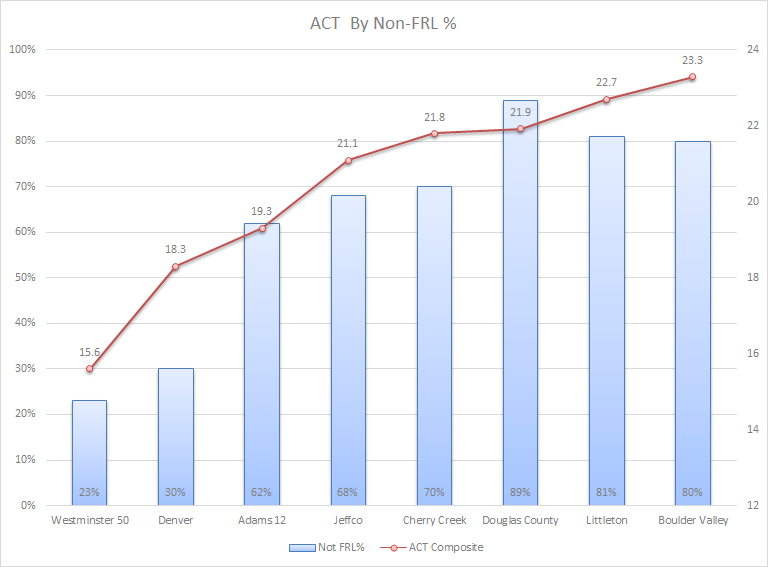 For all districts except for Douglas County, which we discussed earlier, ACT composite scores show the clear relationship with the district’s poverty rate. The following graphic shows 2015 ACT Composite scores for Douglas County, Denver and Jeffco. As the above graphic demonstrates, many Jeffco high schools are very near the correlation line that is the expected result for a given FRL rate. Only a few with low FRL rates show substantially higher scores. Interestingly, the vast majority of Dougco schools all have FRL rates lower than 10%, and cluster below the correlation line, confirming the data points from the graphic above.  Denver schools show some are performing well, while others below expected results.

Yet, opponents repeatedly say that 50% of seniors not in poverty are not college or career ready based on these scores.  Since they refuse to show their datasets or the methodology behind these assertions, it’s rather difficult to test the veracity of these claims.  In the meantime, by all current standards, data provided here align to previous findings: poverty, ceteris paribus, is a strong predictor of student achievement outcomes.

What we can also say with certainty is that there are other factors that can impact ACT performance. For example, percentage of students who are in special education.  The following graph shows the distribution of schooly by ACT Composite scores against FRL rates, but this time, it shows each school type (Charter, Option, Neighborhood) as well the percentage of students who have special education needs.

With few exceptions, charters have some of the lowest percentages of SPED students, and the higher the FRL rate, SPED rates also increase. Those schools that do have 10% or higher SPED students at the higher income schools also show some lower than expected scores.  The net result is that other factors like SPED rates in addition to poverty rates can have dramatic impacts on student achievement results.  All of this provides us with a cautionary tale that there are many factors that drive student achievement, many of which are outside the control of teachers in the classroom. It also suggest that further analysis would most definitely be warranted on the broad assertions made by recall opponents, if they would share the data.

So now, let’s play another matching game. For this one, you will match school district’s along with their ACT scores along with the percentage of teachers who are absent from their classrooms more than 10 days per school year.  According to some recall opponents, this is another key piece of evidence of why Jeffco Schools are failing.  They base this on the premise that if teachers miss more than 10 days per school year, academic performance suffers.  In theory, the higher the absentee rate, the lower the ACT scores.  Absentee rate values are obtained from the US Department of Education’s Office of Civil Rights Data collection, who capture this information (http://ocrdata.ed.gov/)

I’ll bet you assumed that Westminster 50 matched up with D, 53%.  That’s incorrect.  The correct answer is that D matches up with Boulder Valley, the highest scoring of the surrounding districts. Jeffco’s absentee rate is B, 26% – one of the lowest.

We can also graph absentee rates by each district’s ACT scores: 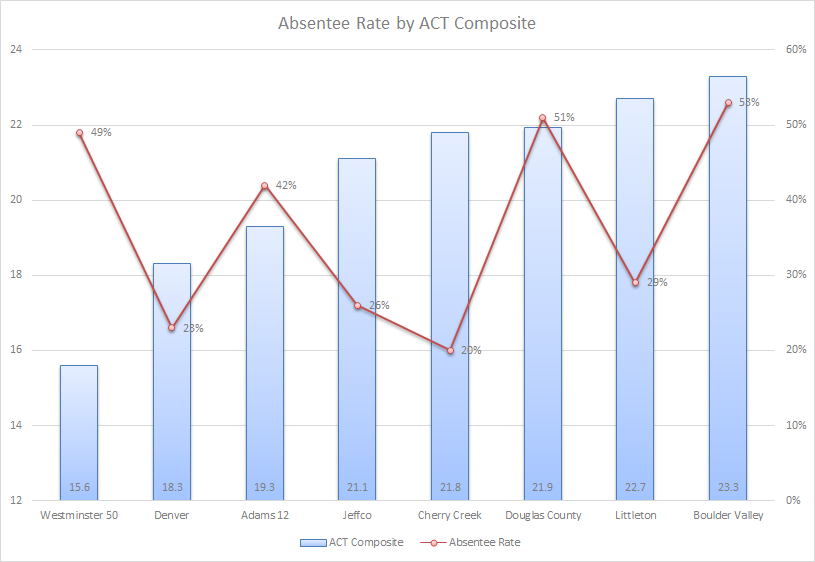 Notice the line?  It’s apparently random. There’s no linear relationship between a district’s test scores and the percentage of teachers who take more than 10 days away from the classroom.  Whereas poverty and scores do show a strong correlation, there’s no evidence of any correlation between scores and absentee rates. Consequently, cherry picking a number from a point in time without any other relevant data to go with it isn’t an “AHA!” moment.  It’s bad methodology and disingenuous.

Recall opponents talk a big game claiming that unions and teachers are failing this district.  Yet, when we show the data, there’s no evidence to support their claims.  This is a classic tactic of fear, uncertainty and doubt.  Worse, by claiming that schools are failing and pulling data out of context, we are led to believe that something is wrong, and that teachers (vis-a-vis unions) are to blame.  It’s dishonest and disrespectful. Even worse, the same bad data is being used and supported by this board majority to hurt our kids, our schools, our teachers and our community.  I also urge you to look at “Unions and Student Achievement” to show that unions aren’t the problem; outside interests, agendas, and ideologies are.

It’s time to remove the uncertainty and doubt, shed the fear, and vote! End dishonest and disrespectful policies and practices (and data).

To pay by check, mail donations to: